The Orientalist: Solving the Mystery…

The Orientalist: Solving the Mystery of a Strange and Dangerous Life . By Tom Reiss. Random House, New York. Hardcover. 2005. No edition stated. Dustjacket. Gold lettering on brown cloth covers. Very good condition throughout, with no signs of wear, in very good dustjacket.  The odd and amazing story of Lev Nussimbaum, who grew up Jewish, in Baku, escaped the Revolution by fleeing to Germany where he pretended to be a Muslim, married an American heiress 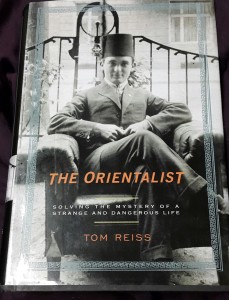 and wrote adventurous books as Essad Bey and Kurban Said, which became favorites of Nazi Europe.  $19.50